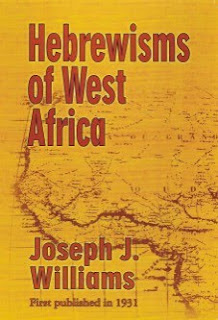 In 1930 the Dial Press of New York published a book by Joseph J. Williams entitled Hebrewisms of West Africa: From Nile to Niger with the Jews. Williams was a Catholic friar who devoted several years in Jamaica studying the Ashanti. In his observations, he noted remarkable evidence of Hebraic culture amongst them.

He indicates quite interestingly that, “The very name Ashanti has itself a strong Hebraic flavor. For, while some would derive the word from ‘Shan’ the name of a plant, and ‘dti,’ to eat, claiming that the title must have been acquired in the time of great famine, when they found sustenance in the plan in question, this is mere quesswork. Actually, the termination of “ti” or “tie” in the names of West African Tribes has usually the general meaning of ‘the race of,’ ‘the men of,’ ‘the children of.’ This would make Ashanti, ‘the people of Ashan.’ There was as a fact, a town of the name Ashan in the domain of Juda. Priests were in residence there according to the First Book of Chronicles, where the word is spelt ASHAN though in the corresponding passage of Joshua it is spelt AIN, which the Jewish Encyclopedia suggests ‘may be a corruption of Ashan.’” (pp. 60-61)
***Note: See 1 Chronicles 6:59 and Joshua 21:16 for the Scriptural references.***

Williams also notes a “truly remarkable similarity of the Ashanti Yame and the Hebrew Yahweh, first as regards the etymological derivation of the words themselves; and then in the tribal concept of Divine Attributes and the created channels of Divine influence; and finally in the divided service.” (p.320) The Ashanti also believed in a Redeemer whose name was Ta Kora, the “son of the supreme God.” (p.320) Not all Jews are anti-Christ but to the contrary, the true Jews acknowledge Moshiach as being identified as Yeshua.

Hebrewisms were not just limited to the Ashanti in Jamaica but were plentiful in the land from which they came: Africa. Williams notes the following irrefutable evidence of Hebrewisms in Africa:
• The Floggings, the traditional number of strokes: forty less one
• The common practice of New Moon festivals
• The oath drink
• The expectation of a Moshiach
• Jewish distinction between diaboli and demonia
• The duodecimal division of tribes into families
• Exogamy
• Blood sacrifices with the sprinkling of blood upon the altar and door-posts
• Mourning Customs
• Obsessions
• Legal defilement
• Jewish octave
• Law on adultery
• Sabbath rest
• Levirate marriages
• Circumcision
• Priestly garb
(See p. 320)

He also provides an interesting map outlining Jewish migration from Palestine, specifically from Jerusalem to Memphis in Egypt to Elephantine through Darfur to Lake Chad, right into Nigeria on the West Coast of Africa. See photo below: 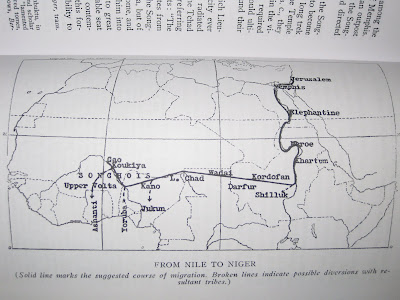 And from West Africa the Hebrews made their way to the Americas in slave ships, a point Williams does not bring out. However Dr. Allen Godbey does in his book The Lost Tribes a Myth: "These facts have peculiar significance when the presence of Judaism among American Negroes is to be considered. Hundreds of thousands of slaves were brought to America from this Western Africa during the days of the traffic, beginning nearly four hundred years ago." He also says: “How much more of Judaism survived among West African Negroes in that earlier time? As persecuted communities, they were rather more in danger than other Negroes of being raided by war parties and sold as slaves. It may be considered certain that many partially (why not fully?, is my question) Judaized Negroes were among the slaves in America. How many of them might still hold some Jewish customs here is another question." (Godbey, p. 246)

Another topic of interest is Williams’ identification of Carthage, the land of the great general Hannibal, as being heavily Jewish. In quoting Sidney Mendelssohn we learn: “There is an old tradition among the nomadic tribes of Tunisia, that the Jews settled in the country before the destruction of the First Temple, and although this statement has been sometimes regarded as unfounded, there can be little doubt that a colony existed in Carthage soon after the building of the city.” (p. 188) In quoting Nahum Slouschz, “There are indications in the Bible, as well as in the works of ancient writers and in the Phoenician inscriptions discovered from time to time, that numbers of Hebrew settlers, or slaves, followed the Phoenicians in the excursions across the Mediterranean.” Adding that, “Inscriptions indicate that certain tribes of Asher and of Zabulon lived in Carthage ever since the foundation of the city.” (p.189)

The Carthaginians also spoke Hebrew. Again quoting Slouschz, “Nearly four thousand inscriptions in the ancient tongue of Canaan have been unearthed in the city of Carthage, dating form the days of Nehemiah, of Simon the Just, of Hannibal, of Hasdrubal…And most valuable of all, we have found again the ancient language and writing of Canaan, the rich, idiomatic speech of a city which once counted seven hundred thousand inhabitants. And we Hebrew writers, we who write and feel in our biblical tongue, have recognized at once that this so-called Phoenician language is nothing less than Hebrew-a pure Hebrew dialect, nearly the same as was spoken in the country of Israel in the days before the Aramaic, before the Masora came to fix its orthographic rules artificially.” (p. 198) And even more revealing Sluouschz affirms, “The population of Carthage was Palestinian in origin and Hebraic in civilization, and if, instead of succumbing, the city of Hannibal had triumphed over Rome, it is probable—nay almost certain—that Hebrew, and not Latin, would have become the dominant language of the Mediterranean countries.” Ironically, after quoting Slouschz, Willams dismisses his assertion by claiming this to be “the extreme view of an enthusiast.” (p. 190) I beg to differ and say that Nahum Slouschz speaks a penetrating truth that pierces bigoted sensibilities. The Jewish Encyclopedia as quoted also by Williams asserts, “Modern scholars are inclined to identify the Biblical Tarshish with Carthage, since it is thus translated in the Septuagint, the Targum, and the Vulgate.” (p.191)

Joseph J. Williams comes off as a skeptic at first but towards the end of the book, I believe he’s made a believer by his own research. His unbelief is hung on the reliability of it. Given the historical context in which it was written it did not behoove the author to give any credit to blacks, particularly those in America. But regardless, there is much that I have gleaned from this book as indicated by the review.

In closing, Williams quotes Nahum Slouschz again with these words from his book Travels in North Africa in which he maintains, “It is certain that shortly before the destruction of Jerusalem, Jews and Jewish proselytes formed a large part, if not the whole majority of the population of Libya.” Libya was the ancient name of the whole continent of Africa as described by the so-called “Father of History” himself, Herodotus. Herodotus called Africa “Libuwa”. Slouschz again reiterates, “In the Roman epoch, at the beginning of the Christian era, there was a prosperous Jewish Diaspora spread over the whole of Northern Africa as far as the shores of the Atlantic.” (p. 323, see Williams’ footnotes)

Mr. Williams also mentions another interesting scenario involving the “Yahoodee.” The author says, “Later while criticizing a map that had been published by T. Edward Bowditch in 1819, he says, ‘Beginning at the top of the map, I find a place called Yahoodee, a country or town of non-existence. Yahoodee simply implies Jews, the tribes of Jews, etc. which term the Moslems apply to those people of the Mosaic faith who inhabit the lower Atlas, and the districts of Suse. They also apply the term Yahoodee to the Hebrew or Jewish tribes, whether native Africans or not, who inhabit Maroa, some parts of Fillany, and the neighborhood of Timbuctoo.” (p. 64) And lastly, Williams again quoting Slouschz speaking of the ‘Renegade Jews of the Desert’ says, “At one time they professed Judaism, but, as the result either of persecution or indifference, they have deserted their faith. Mussulmans though they are, they still retain customs which point to their Jewish origin, while some still marry only within the tribe. In most cases these Hebrews by race and Mussulmans by faith seek to hide their origin, which has become a burden to them. But the desert has a long memory. Ten centuries after these conversions certain tribes, nay, the inhabitants of certain cities, were pointed out to us as Yahudis-Jews.” (p.227)